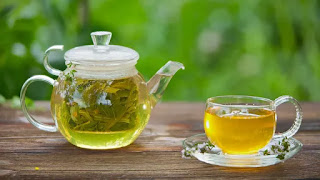 I hear many people complain that they feel like they can’t do or eat anything as it seems that everything in this world is bad for their health.  In writing these articles it’s easy to fall into that same trap and report on all the things that detract from health.  So when I come across something that actually promotes health and longevity, I try to take notice and bring it to your attention.  One of those things is Green Tea!

I hope that by now, you’ve heard that green tea can be effective at reducing the risk of numerous forms of cancer.  Studies vary, but on average drinking five cups daily of the antioxidant extract can reduce general cancer risk by around 50%.  You may have even heard that drinking green tea can reduce the risk of cardiovascular disease.  And with diabetes being the fastest growing form of chronic disease, you may want to take note that green tea helps with insulin resistance which is the very mechanism of type II diabetes.  For me, that alone is enough to seek out the stuff and drink it down.  However, recent research has discovered that green tea also has the potential to prevent and possibly even reverse the effects of Alzheimer’s and other forms of dementia.  Alzheimer’s occurs as the result of your brain cells being impaired and killed from something called amyloid plaques.  Like every other degenerative process in the body, these plaques are the result of oxidative stress and free radical damage that are directly related to inflammatory diet, stress, and lack of exercise.  Before this study, the only proven method of preventing Alzheimer’s was physical exercise and consuming excessive fruits and vegetables for their antioxidant benefits.  There are only five drugs that treat the disease, but they only partially treat some of the symptoms temporarily for about half the patients who take them.  Scientist have found that green tea not only prevents the formation of amyloid plaques but can actually break down existing plaques in early development and can even promote the production of new nerve cells in the brain (which was thought to be impossible not too long ago).  These new cells were noticed in the part of the brain known as the hippocampus which is known to convert short-term information into long-term memory.  Through the use of functional MRI, the scientists of a European study were able to see changes in the brain cells with just a single dose of green tea or with just one week of green tea supplements!

I would like to clarify that the green tea we’re talking about here is not the stuff you buy at the gas station that is loaded with high fructose corn syrup.  You need to get the real thing.  In researching this, the types that consistently came up with the highest level of anti-oxidants were brands of Lonjing or Dragon Well teas.  However, I did find results from a UCLA study that claimed even the Celestial Seasonings and Lipton green teas were considered high in these same anti-oxidant levels.  In my search, I was unable to determine which brand is the best for sure, but one thing I know is that I’m going to start drinking some form of Dragon Well tea right away!

Posted by Rivertown Chiropractic Wellness at 11:58 AM