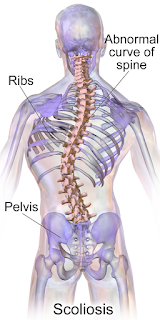 Scoliosis is defined as any lateral curvature of the spine that is greater than 10 degrees when measured. It is classified depending on the age of the patient and the magnitude, direction, location and cause of the spinal curve. There are three classifications based on the age at which the curvature began. Infantile scoliosis starts from birth up until 3 years old. Juvenile scoliosis begins between the ages of 4 and 9. Adolescent scoliosis begins after the age of 10. The earlier the curvature begins, the greater the risk for curve progression. The most common area for a scoliotic curve is in the thoracic spine, but it can develop at any spinal level. The direction of the curve is also important. The curve can either have its convex side on the left or on the right. This has a large impact on the prognosis and potential for future problems and symptoms. A left sided curve has a greater risk to impede on heart and lung function.

The treatment/management of scoliosis varies depending on the classification of scoliosis. However, the main goal in all cases of early onset scoliosis is to limit the progression of the curve until the patient is skeletally mature, along with preserving proper heart and lung function. Once skeletally mature the progression of the curve is almost always stopped. Different treatment options include, casting and bracing, surgery if absolutely necessary, chiropractic care and physical therapy.

Posted by Rivertown Chiropractic Wellness at 11:35 AM